After a cooking accident left her with burns, skincare entrepreneur Sally Olivia Kim of Crushed Tonic turned to collagen to heal herself.

Sally Olivia Kim didn’t want to be an entrepreneur — she just wanted to feel like herself again.

Her journey to launching skincare company Crushed Tonic, which makes and sells powdered collagen, began when she suffered significant burns to her arms during an accident. She was in her early 20s at the time, and in the summer months following the incident, recalls seeing her friends wearing fun bathing suits — and envying them for not having to concern themselves with gloves or long sleeves.

She immersed herself in research, on the hunt for a long-term solution that would heal and regenerate her skin. That’s how she discovered studies on the possible skincare benefits of ingesting collagen, a naturally occurring protein in animals and fish. Once she got positive results from taking daily homemade supplements, she encouraged her friends to do the same — and after they did, they convinced her to start up and sell her powder to others.

Kim launched New York City-based Crushed Tonic in April 2017, and growth quickly followed. In addition to online customers and fans — its Instagram account has well over 46,000 followers — the company has wholesale partnerships with makeup giant Sephora and popular gym chain Equinox, among other businesses. And last year, she says Crushed Tonic pulled in $1 million in revenue.

Her strategy for standing out in a crowded marketplace, and encouraging repeat customers, is rather simple: “Trust,” she says, “is such an important — if not the most important — component of who we are.”

Building A Beauty Brand to Rely On

At the bottom of the Crushed Tonic website, a simple disclaimer reads: “These statements have not been evaluated by the Food and Drug Administration. This product is not intended to diagnose, treat, cure, or prevent any disease.”

It’s an important fixture, Kim says. “Our mantra is to always be the most honest and transparent — especially when it comes to results we can or can’t deliver.” She takes this part seriously, and bases her product claims on studies conducted by researchers from universities and in a variety of labs that show positive health outcomes when collagen is used. And to better understand the $134 billion skincare market, she turns to publications like IBISWorld.

“There will always be naysayers,” she says, noting that there have been “hundreds of focus trials and studies proving the efficacy of ingestible collagen.” She concedes that perhaps more comprehensive testing could be done, with larger sample sizes and more diverse groups of study participants. Still, she adds, this is hardly a new remedy. Rather, “collagen supplements have been around for decades — centuries, if you count it in its food form.”

But to allay any lingering concerns, Kim engages directly with customers on Instagram and the popular question-and-answer website Quora. “This intimacy with our clients has also helped keep me accountable as well,” she says. “I get to be authentically myself all the while still speaking about my brand — whether I am answering questions about Crushed Tonic or my journey in general.”

A Solution Becomes a Startup

When Kim was 22, she had recently graduated from New York University with a degree in English literature, and was working at a growth equity firm as an analyst. Her career trajectory — indeed, everything — changed when she endured severe burns to her arms after hot oil splattered on her while cooking.

Her prescribed treatment options included silicone patches and ointment, neither of which did much for her. Frustrated, she began to investigate alternative, over-the-counter treatment options, which led her to literature on collagen.

She began drinking it daily, first by taking pills and then by adding powders to her water or coffee. The taste, however, left much to be desired, she remembers. Kim eventually began taking shots of it in liquid form. It wasn’t the most delicious part of her day, but she soon began to see results. Excited, she started to share it with her friends — but found that “when I followed up, they said they couldn’t get themselves to take it after the first shot.”

How, she wondered, could she get them to take it — and even enjoy it? From her kitchen, Kim whipped up naturally flavored powders, and doled out coconut, coffee and matcha varieties to her friends. A month later, her friends had a much different response: “Can you make more?”

As it turns out, she could — per month, Kim estimates that she and her seven part-time employees sell about 620 kits through her website, and 1,000 more through her wholesale partnerships.

Of course, getting to that point came with its own challenges. By the time Kim was ready to launch, she had settled into a digital strategy job at Condé Nast — and was in no hurry to leave her steady, well-paying gig behind. So initially, Crushed Tonic was a weekend project consisting of a small online store and a blog full of recipes.

But her little side hustle was getting attention — including from publisher W. W. Norton. “That was the biggest moment that really pushed me forward,” she says. While working on what would become her first book, “The Collagen Glow,” Kim began thinking about ways to take her business to the next level.

She quit her job and bootstrapped her efforts to expand Crushed Tonic to what it is today. But while she had the necessary funds on hand, she still grappled with several problems many women entrepreneurs can relate to: finding a manufacturer, fundraising and achieving work/life balance.

Kim cites manufacturing as her biggest challenge. Factory heads saw a young woman running a beauty business and either dismissed or underestimated her, she recalls. “Being [young] when you start, manufacturers don’t take you as seriously as another legacy brand.” That manifested itself in lengthy lag times between placing orders and receiving product, sometimes necessitating sudden switches on more than one occasion to make sure goods got to customers on time. And while meeting with investors, “most times, they didn’t care about the product or company at all. They were barely interested — or asking me to dinner.”

Those obstacles, combined with the amount of time entrepreneurship takes out of a business owner’s life, have been “grueling,” she admits. “To say that it’s been stressful is underselling it.” But she feels the sacrifices are worth it, as she contemplates expanding her product line and negotiates deals with international wholesalers. “I’m turning my passion into a career. No matter how many parties I say ‘no’ to, it feels okay, because at the end of the day I’ll be happy making strides with my business.”

"Drink Your Way To Better Skin"

Let customers speak for us

Super happy with the taste and effects I'm seeing in my skin, which is exactly what I was looking for!

e
ORIGINAL + TURMERIC CRUSHES | $99 e.a.
renewed my smile when I look in the mirror.

I am only 39. Black puffy circles replaced my eyes, the worry lines around my eyes and mouth were deep and marked. I felt so run down and hopeless. Although I was doing my best nutritionally to stay healthy it was not enough.

I had heard about marine collagen a few different times and over the next few days as my son slept I read watched online and came across your website. To be honest, I ordered it with not much hope.

Now after 3 weeks of using it I can honestly say there is a huge difference in my forehead and lines around my mouth. I also seem to recover more quickly from heavy lifting workouts.

Your product has given me some esteem back. One act of self care has impacted many facets of my life. I feel pretty again. I don't wear makeup , my morning routine takes all of 5 minutes. I drink my water and I eat well and exercise. I am very thankful for this product because I feel like I have taken back the years life put on my face too soon.

I really wish I could order from somewhere in Canada though. Other than that no complaints. I truly love this product. It has renewed my smile when I look in the mirror. 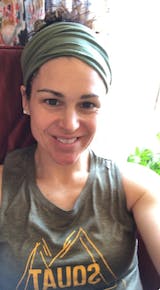 I have been buying this product for a while now and still love it. But lately my packages have arrived completely covered in the tonic powder. I had to throw out two packets that were open. Sent an email to customer service with no response.